This happened in NJ but it is always a good idea to cover all of your gun cases and ammo boxes to avoid the “plain sight” excuse the police can use to search your car.  Never give permission to have your car searched. 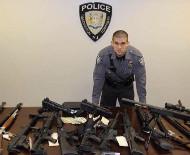 Motorists driving through New Jersey can be subjected to a warrantless search if their luggage is similar in appearance to a gun case, an appellate court ruled last week. The Superior Court’s Appellate Division upheld a five year prison sentence against Dustin S. Reininger, a former police officer who was in the process of moving from Maine to Texas when a Readington Township police officer recognized the cases in the back of Reininger’s vehicle as the sort that usually carries a rifle.

During the long trip on March 20, 2009, Reininger became tired and decided to pull off the road in an empty, well-lit parking lot. He stopped his green Toyota SUV, turned off his lights, and went to sleep in the driver’s seat under a blanket. At 3:25am, Officer Gregory Wester knocked on his window and woke him up, shining a flashlight in his eyes. Officer Wester testified that Reininger appeared “nervous and tired.” The policeman asked Reininger whether he was carrying anything illegal.

“No, no, all good,” Reininger replied.

After obtaining a warrant, police recovered fourteen rifles, four shotguns and three handguns, including a loaded Glock. A grand juror had asked the prosecutor whether this man would have been charged if he had used a different case.

“Basically, if someone is moving… from Residence A to Residence B, or transporting, say, for example, they just purchased it, so they can transport it to their home, if they are properly secured, locked in a trunk, locked in a special lockbox and unloaded, then that would most likely provide an exception to these requirements, and therefore a defense to being charged,” prosecutor Bennett Barlyn explained.

Reininger’s SUV did not have a trunk, and state law only requires the firearm be in a “closed and fastened case” or “securely tied package” while transported. His attorney argued the zippered cases satisfied this requirement.

A jury acquitted him of the charges for possession of the “assault firearms” and handgun possession but convicted him in absentia of illegal possession of hollow-point bullets, shotguns, rifles and a high-capacity magazine. He was apprehended in Texas and extradited to New Jersey.

“What I don’t understand is I am a citizen without a criminal history who has served this country not only in the military but as a volunteer to my community and as a police officer, not even making hardly any income at all, and I would have given my life to protect another person and for this country,” Reininger said in a statement. “How can I be convicted for exercising my right? When does it become a crime for exercising one’s right?”

The court also upheld the warrantless search of Reininger’s vehicle.

“Based on the outward appearance of the nylon cases, Wester reasonably believed they contained rifles or shotguns that were easily accessible to defendant,” Judge Graves wrote. “In our view, however, the warrantless seizure was not necessary for the officers’ safety, because defendant had been removed from the vehicle and there were multiple backup officers at the scene. Nevertheless, we conclude the limited seizure was valid under the plain view exception to the search warrant requirement.”

A copy of the decision is available in a 170k PDF file at the source link below.

This entry was posted in Misc.. Bookmark the permalink.